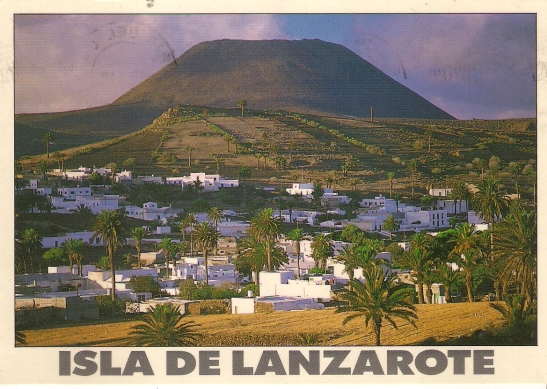 The weather here is a bit too hot for sunbathing. We have a lovely apartment and the pool is about 10 yards away. We hope to be well browned off when we see you both. Dad & Elizabeth

Postmarked Puerto del Carmen 19th September 1990, from my dad and stepmum on holiday in Lanzarote

Looking through some old scrapbooks I came upon this postcard which has brought back some memories and a half. What struck me first was just how much can change in 25 years. The card was sent to my brother and I at our family home, where I grew up and lived for the first 24 years of my life. At this time my dad, already twice divorced, had embarked on what would be his final and most successful relationship – third time lucky! He and Elizabeth didn’t marry until 1996 but they’d been going steady for about a year when they sent this from their hols. I don’t recall for sure but this might have been their first holiday together (though they’d known each other on and off for almost 30 years by this stage…. it’s a long story which I won’t go into here).

It’s funny to see Elizabeth writing that it’s ‘a bit too hot for sunbathing’ as they both upped sticks and moved to Andalucia in 2006, where E. still lives. Sadly they didn’t get to spend the planned 20 years together in the sunshine, watching those thousands of Spanish sunsets with a glass of red and a misty eye. Dad died, only 66 years old, in 2011 after a battle with a brain tumour. They’d been together for the best part of 22 years and, despite having the joy of me before this, those were the best years of his life, thanks to E. I’m pleased to say that we are still good pals and always in touch.

Strangely, that can’t be said of the ‘G’, to whom this postcard was also addressed. My brother and I are what they call ‘estranged’, after a very fraternal childhood and into our teens we were best mates… but it all started to go pear-shaped shortly after this (nothing to do with the postcard I must add!) And, so, 25 years on, this card just brings me painful memories of a time just before it all went wrong, when I was still at school and hadn’t quite realised how things were about to go down. Oh well.

One thing that really does amaze me, which just dawned on me as I wrote this; when she wrote this postcard E would have been almost the same age as I am now. Which, in my current situation, makes me feel ridiculous. Oh well (again). On we go.